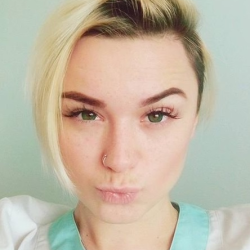 My ex-whatever brought medicine to me the other night. We were friends for a few months, dated for a few months and broke it off because...I'm still not totally sure why. With the exception of the occasional drunken encounter that reminds me why we can't be together, we've been fairly successful at remaining friends.
So, he brings me ibuprofen and then he sits in a chair across from me, lounging on the couch. We look at each other for a while. Actually, try not to look at each other because neither one of us has anything to say, and we're past the small talk stage. After about half an hour, conversation starts rolling and it feels natural and good. Ten minutes later he leaves for dinner, and as he's walking out, he says...
"Take care."
I hateeee The Take Care. More than I hate Trader Joe's any time after 11 AM. More than my disdain for voicemails that say "Hey, it's me. Call me back." The Take Care is something you say to a third-tier acquaintance that you run into at the bodega. The Take Care is like saying, "Well, I probably won't see you for a while, crazy bitch. But I hope you don't break the other foot." Not me, buddy. No way.
Boys and girls, please take note and just wipe The Take Care from your vocabulary. Instead, let's go with The See You Later. Even if it's a complete lie, at least it leaves you with some sort of self-dignity.

You've probably heard of "slut-shaming". If not, it's what it sounds like: a woman has casual sex, and is immediately screamed at by people incapable of minding their own business about how awful she is. I'm oversimplifying a bit: there's this whole weird aspect of our culture that's afraid of women who have sex with more than one man in their entire life that the term sums up.

But have you heard of "creep-shaming?" It's when jerks complain about women calling them out on their crap.

I hate the term "creep-shaming" for a simple reason: it's incredibly entitled.

Just because you're a guy doesn't mean you're immune from being called out when you act badly. For all the shtick about how it's hurtful and how it "hinders men from directly expressing their sexual needs", really what it boils down to is they don't want to hear the problem lies with them. Nope, sorry, it does. Is it true that a socially awkward guy can come off badly and be mislabelled as a creep? Absolutely. Does it mean the majority of the guys whining about this are just misunderstood? Not in the least.

Look, guys, it's really simple: if a woman calls you a creep, she's doing it because you did something that made her feel unsafe. This really isn't hard to understand: if you act like all you want to do is bang her and that you don't care about her feelings, you're pretty much 90% of the way to "rapist" already. Throw in no real regard for her as a person and you're 95% of the way there. No kidding she feels unsafe: for all she knows, she is.

I understand that communicating with people you don't understand is hard and you just want to get to putting your penis in her, but women are people, and they get to choose what goes in their bodies. If they think they're putting their safety at risk just talking to you, guess what? They're not going to talk to you.

What bothers me about all this is the victim stance. It's not hard, at all, to figure out what not to say to women. All you need to do is spend a little time trying to view the world as women see it.

If that's too much to ask, well, even if you're not a creep, why should she waste her time?

• Looking for Business development manager for newly established Construction company in Abu Dhabi. • Must be 5 Years of Experience in Construction Industry of […]

A Reputable Real Estate Company is looking for a Marketing Executive For immediate hiring in Dubai. Applicants must be sales-oriented and fluent in English.Send updated […]

To apply for this job, please click the link and fill the form (No phone call, no direct email will be entertained. Only CV’s accepted […]

To apply for this job, please click the link and fill the form: https://career.adgeco.com/jobs/finance-auditor/ Job Description Within the Internal Audit Department, you perform audit missions […]

Well maintained family building for a One Bedroom Apartment available for r...